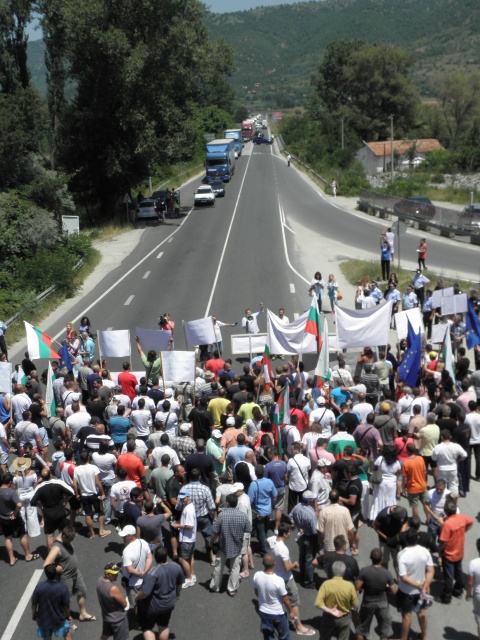 Regular police are shown just waiting at the side as Bulgarian citizens instigated by the government block the E-79 internaitonal road. Photo by BGNES

Lyuben Tatarski, MP from Bulgaria's ruling GERB party, was at the helm of Sunday's blockade of the E-79 international road to Greece in support of the controversial new Forestry Act.

The protest, staged by the "Nature for People and Regions" coalition funded by notorious businessman Tseko Minev, was staffed by several hundred citizens from the mountainous Blagoevgrad region.

Police was vaguely present at the site of E-79 near Simitli and did nothing to prevent the blockade of the major international road leading to Thessaloniki.

In contrast, spontaneous protesters in capital Sofia had to clash with armored riot police Wednesday through Friday to stage a blockade of the Eagles Bridge intersection downtown.

Sunday's "protest" by citizens of Bansko, Razlog and Dobrinishte was instigated by Bulgaria's Minister of Agriculture Miroslav Naydenov, who said municipalities have to root for the new law, which was alledegly framed to benefit remote areas.

Citizens who came out in thousands in Sofia since Wednesday, when the Forestry Act was passed in Parliament, to the contrary claim that the law was passed to favor explicitly the ruthless development of protected areas by the likes of Tseko Minev, who has significant holdings in Bulgaria's ski business.

Naydenov's Saturday press conference was intentionally made to coincide with a veto on the Forestry Act imposed that day by Bulgaria's President Rosen Plevneliev.

According to Bulgaria's Constitution, the President's veto has a consultative nature, with the Parliament having 2 weeks to revise or re-adopt the legislation, without the President having the powers to impose a second veto.

This far, Bulgaria's ruling GERB party, which holds a disciplined and comfortable minority of 117 MPs out of 240, has made it clear it will not bow down to the demands of those concerned for the environment.

Minister of Agriculture Miroslav Naydenov, as well as Minister of Interior Tsvetan Tsvetanov and Sofia Mayor Yordanka Fandakova, have come out with statements criticizing the Sofia protests against the Forestry Act.

At the instigation of Naydenov, Saturday Bulgaria's National Association of Municipalities also came out with a statement in support of the new law.