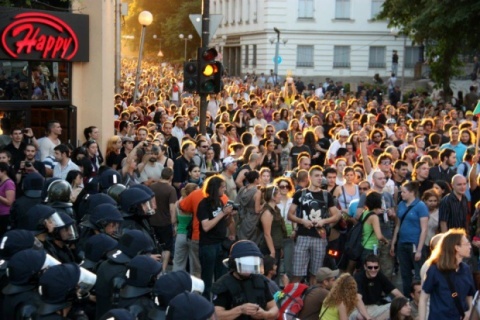 The gathering point of the Saturday anti-Forest Act rally is once again the vicinity of Orlov Most in Sofia. The starting time is 7:30 pm. Photo by Facebook

Bulgarians, mainly young people, are organizing Saturday for a fourth evening in a row another protest rally against controversial amendments of the Forestry Act, passed by the Parliament earlier in the past week.

The demonstrators have organized themselves through a Facebook group named Occupy Eagles Bridge. About 56 000 have been invited to join and over 4 000 have confirmed attendance for Saturday evening.

The gathering point is once again the vicinity of Orlov Most (Eagles Bridge), which is a key intersection in Sofia. The starting time is 7:30 pm.

The appeal of the group states:

"Boyko Borisov is attempting to put us to sleep by violating the Constitution. This is why we must come to Orlov Most. We should not trust them. They assured us that there would not be lobbyist amendments, and that everything is done in the interest of skiers. The truth is that oligarchs demand their share."

The organizers of the group further note that they are protesting the scandalous amendments that benefit a shady oligarch and the impudence of Emil Dimitrov aka Emo the Rothmans, Member of the Parliament from the ruling party of Prime Minister Borisov Citizens for European Development of Bulgaria, GERB, who has stated: "Bulgaria belongs to us; the forests belong to us and we will do what we please with you or without you."

The demonstrators also demand from President, Rosen Plevneliev, to veto the Act.

They list the following reasons for their discontent: the law being a State help for private corporations (about which Bulgaria has been criticized by the European Commission); allowing construction under public-private partnership instead of public tenders, serving one company – Vitosha Ski; allowing overdevelopment of resorts and mass felling.