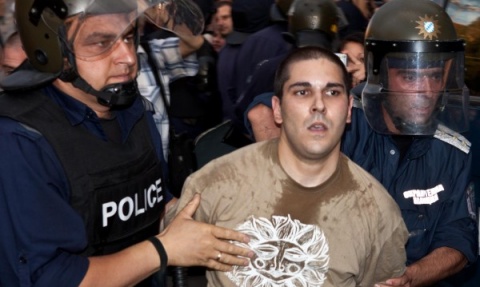 Ten people were arrested in Sofia after tensions and clashes between police and demonstrators, protesting controversial legislation, escalated. Photo by BGNES

Over 3 000 people gathered once again Friday evening in downtown Sofia to protest against amendments in the Forestry Act passed by the Parliament Wednesday.

The rally lasted over 3 hours. Participants chanted "We Want Nature, Not Concrete!", "Veto!", and "We Will Be Back Tomorrow and Every Day until Victory!" They are adamant the unrest will continue until President, Rosen Plevneliev, imposes a veto on the controversial legislation.

The rally came on the heels of a 2-hours-long meeting between environmentalists and Prime Minister, Boyko Borisov, in the Council of Ministers building. The activists say this is the first time in the last six month Borisov has answered their repeated calls for discussion.

In a press conference after the meeting, Agriculture Minister Miroslav Naydenov stated that consensus has been agreed upon three of the four debated issues. However, the parties have not reached an agreement concerning the most important one – the planned construction of ski tracks and lifts without changing the land use.

Despite appeals of the authorities, and personally of the PM, to not block the heart of the city, citizens gathered again at 7 pm near the Ariana Lake in the vicinity of Orlov Most (Eagles Bridge), which is a key intersection in Sofia. They then marched to the Presidential building and back to the lake. During the march some of them sat or lied down on the lanes of major thoroughfares in downtown Sofia, blocking traffic.

The rally was guarded by a large number of riot and special police forces. At times, clashes escalated as police attempted to remove demonstrators from traffic lanes, using batons and shields.

A bTV cameraman was kicked and pushed to the ground and his camera smashed broken.

Another 10 people were arrested, following the Wednesday and Thursday detentions of over 20 people total.

There will be a new meeting with Borisov Monday to continue negotiations on the amendments.