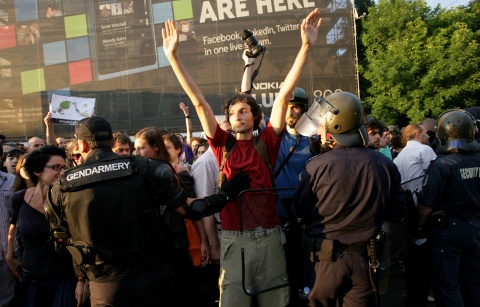 Over 2000 protestors rallied Thursday evening against the controversial environmental legislation, blocking traffic at the Orlov Most junction in downtown Sofia for more than an hour. Photo by BGNES

Prime Minister Boyko Borisov has asked opponents of the newly passed controversial amendments to the Forestry Act to refrain from blocking the Orlov Most junction in Sofia and to choose another place for the rallies.

"My first appeal to these people is to refrain from blocking the Orlov Most junction. They can stage their protests at any other place in Sofia they like – in front of the Parliament building, for instance. However, if they seal off the Orlov Most junction, the police are under obligation to open it," Borisov stated in an interview for the morning broadcast of private TV station Nova TV.

The Prime Minister vowed that resorting to violence on the part of police officers would result in dismissals.

"Speculations have piled up, further inflaming tensions over the last few days. I am worried because these young people can go stage a protest rally anywhere else they wish in Sofia. They have never been and they will never be prevented from staging a protest," Borisov noted.

"Our MPs, who participated in the adoption of the amendments to the Forestry Act, have insisted since Thursday to meet with the protesters and explain to each and every one of them what the provisions say. Reports started circulating yesterday that we were green-lighting shale gas  together with the lifting of the moratorium on conventional gas and the people were misled and the tension shot up," the Prime Minister declared.

Borisov's comments came after Bulgaria's Parliament partially revoked the ban on the deployment of hydraulic fracturing for shale gas exploration and production.

On Wednesday, Borisov told protesters that they would not stop investments in winter tourism in Bulgaria.

He admitted that the amendments to the Forestry Act were lobbyists, adding that it would be to the benefit of snowboarders, skiers and fans of all winter sports.

Meanwhile, opponents of the newly adopted amendments to the newly passed environmental legislation Bulgaria's Forestry Act are gearing up for a third mass rally on Friday evening.

For two days in a row, thousands of protestors have blocked the Tsar Osvoboditel Blvd, one of Sofia's main road arteries, for about an hour starting 7.30 p.m.

Wednesday's rally brought together some 500-1000 people, while Thursday's protest included over 2000 people.

On Wednesday, Bulgaria's Parliament passed conclusively amendments to the controversial Forestry Act allowing the construction of ski tracks and lifts without changing the land use.

The protesters are seeking a presidential vet on the amendments.