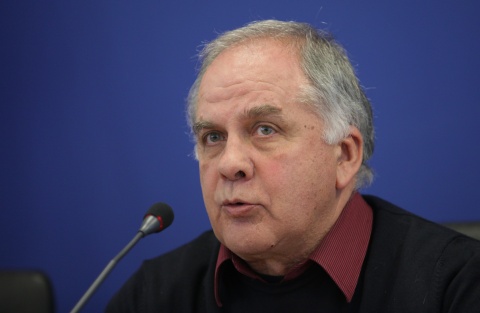 Dancho Lazarov, president of Bulgaria's volleyball federation, still has not announced whether he will resign or run for a new term despite public pressure. Photo by BGNES

The conflict in Bulgaria's volleyball turned ugly after the former coach, popular Radostin Stoychev, was accused of "far from spectacular" performances.

"I don't want to sound rude, but Radostin Stoychev has done nothing spectacular for Bulgaria's national volleyball team. He has proved his good skills at his work with the clubs,' Dancho Lazarov, president of Bulgaria's volleyball federation told Nova TV channel on Wednesday.

In his words the poor play of the men's volleyball's team – number six at Euro 2011 and its failure to earn an Olympic berth for London 2012 during the first qualifications – is all because of Stoychev.

"I have no idea how I turned to be the bad cop. And I have no intention to apologize. What I do for a living has nothing to do with the volleyball. I am a construction engineer."

Internet forums are overflowing with furious comments at Lazarov as most fans fervently supported Stoychev from the moment the conflict erupted. Fans are urging people to boycott the matches of the team and call for the resignation of Lazarov and other people from the federation.

Stoychev and Kaziyski decided to quit in the wake of a bitter conflict with Bulgarian Volleyball Federation head, Dancho Lazarov.

The popular and very successful coach recently declared that he will not lead the team at the Olympic tournament if Lazarov does not resign. Talking to journalists on Monday he said he will stand by his promise as Lazarov refuses to resign despite the public pressure, the scandals and blunders he has made.

On Monday Stoychev harshly criticized the federation for its inefficient management, the scandals that have marred all championships, the inflated number of board members, the existence of fictitious clubs.