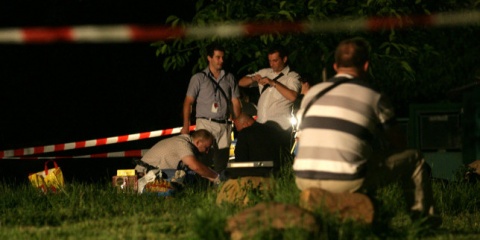 The search for explosives in a Sofia apartment building continued all night. Photo by BGNES

Suspicions of an arsenal of pyrotechnics and explosions in the basement of an apartment building left 80 residents of Sofia on the street overnight.

People from apartment building 24-25 in the Sofia Krasna Polyana district were evacuated Tuesday evening. The Interior Ministry told them and the media that they were conducting a special police operation without offering any other details.

The Chief Secretary of the Interior, Commissar Kalin Georgiev, speaking for bTV, explained Wednesday morning that the residents are out of danger and one person has been arrested.

People from the building, however, were forced to spend hours in the little park nearby, without having any idea what was going on. They say off-the-record that a pyro-technician of the Boyana film center near the capital lives in one of the apartments.

The long night outside started for some as early as 2 pm when people sitting on a bench in front of the building were asked by policemen to move away without any other explanation. By 7 pm all people residing there were evacuated, again without explanation.

A little after 10 pm, the Krasna Polyana Town Hall offered shelter to them. They were allowed back inside their homes at midnight, but the search continued to the wee hours Wednesday.