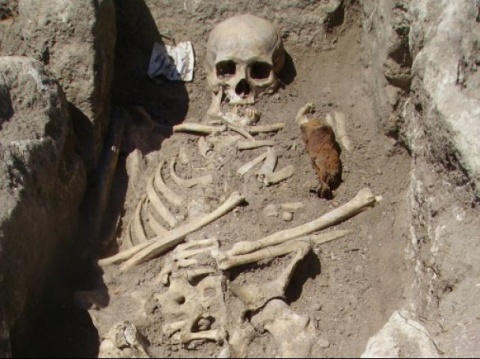 New centuries-old skeleton of a man who has been buried with a rite to prevent him from becoming a vampire has been found in central Bulgaria.

The skeleton is nailed to the ground with four metal brackets and burning coals were placed over the tomb, according to a report of the largest private TV channel bTV.

The skeleton is of a man about 30 years of age, and it is yet to be dated, but Bulgaria's top archeologist, Nikolay Ovcharov, is quoted saying it is several centuries-old.

Ovcharov explains that the man has not been a vampire, but was buried with a pagan rite to prevent him from turning into one after the death.

The skeleton was found during archeological digs in a monastery near the central city of Veliko Tarnovo, where 10 years ago Ovcharov's team came upon a very similar find.

A medieval vampire skeleton, which was recently discovered in Bulgaria's Black Sea town of Sozopol and was brought to the National History Museum, stirred real "vampire" hype in Bulgaria and abroad.