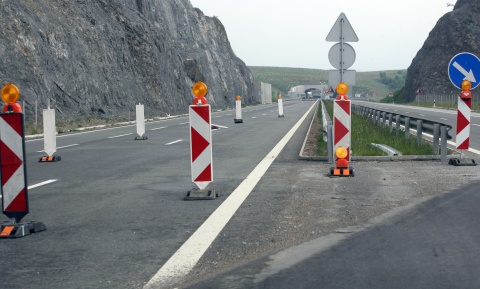 Bulgarian drivers will be enjoying a speed limit of 140 km/h (87 mph) on highways. Photo by BGNES

The legislative amendment was already adopted at first reading in April regardless of the adamant criticism by both the rightist and the leftist opposition.

The amendment was sealed Tuesday after an hour of heated debates with 83 votes in favor (primarily of the ruling center-right party GERB), 15 votes against, and 1 abstaining.

The head of Bulgaria's Road Infrastructure Agency Lazar Lazarov has told reporters in Parliament that the law will not provide a 140 km/h limit for all highways in Bulgaria but only for some of the sections that are actually fit for such speed. These will be the brand-new highway sections and the ones that have been rehabilitated.

According to the rightist Blue Coalition, which slammed the ruling party GERB, the raising of the speed limit by 10 km/h will lead to 30% more casualties of traffic incidents. The blue MPs also pointed to the example of Spain which recently reduced its speed limit from 120 km/h to 110 km/h.

Stanislav Ivanov, a MP from the GERB party, presented another statistical data set that indicated that the number of casualties went down when increasing the speed limit. He cited as evidence the last increase of the speed limit in Bulgaria from 120 km/h to 130 km/h back in 2002.

The MPs also voted to make the speed limit for Bulgaria's so called "high-speed roads" (four-lane roads that do not meet all requirements for highways) 120 km/h.

In fact, the latest amendments to the Roads Act adopted Tuesday introduced the high-speed roads as a separate category of roads in Bulgaria's road network.

Road Infrastructure Agency chief Lazarov admitted that some of the highway sections in Bulgaria will be restructured into high-speed roads for lack of funds – especially the section of the future northern "Hemus" highway between Veliko Tarnovo and Shumen in Northern Bulgaria.

This confession led to an outrage among a number of opposition MPs, especially those from the northern constituencies, who insisted that the Hemus Highway should be built as a highway, as promised to the locals.

Bulgaria's Interior Ministry initially rejected the idea for an increased highway speed limit. However, Interior Minister Tsvetan Tsvetanov has pointed out that the increase will be valid only for certain sections of the highways.