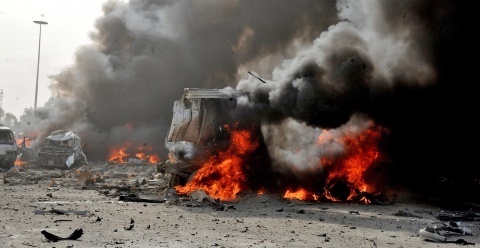 A handout picture released by the official Syrian Arab News Agency (SANA) showing smoke rising from burning cars at the scene of two suicide bombs in al-Qazzaz residential area in Damascus, Syria, 10 May 2012

Fresh eyewitness reports from the ground suggest that the horrendous Houla massacre in Syria was committed by rebel forces, not by loyalists to President Bashar Al-Assad.

The summary killing of 108 civilians in Houla, many of them children, raised an international outcry against Assad's regime, with many countries, including Bulgaria, breaking diplomatic ties with Syria.

However, an analysis of what happened in Houla on May 25, as well as reports by locals, show that the atrocity was carried out by rebel forces, just as claimed by official Syrian news information agency SANA.

Tuesday reputed German newspaper Frankfurter Allgemeine Zeitung writes the fact that the larger part of victims of the massacre were members of the Alawi and Shia minorities in teh village strongly points to the massacre being committed by armed Sunni rebels.

According to eyewitness reports quoted by FAZ, the atrocity began after rebel forces attacked threearmy checkpoints near the village to protect local Alawi communities.

During the skirmish, the massacre itself began, in which armed Sunni rebels turned on Alawi and Shia families and slaughtered them.

Then they filmed and photographed the victims to present them as Sunni victims of the Assad regime.

The Frankfurter Allgemeine also quotes nuns from the local St. Jacob Christian Convent, in which refugees from Houla took shelter.

Sources from the monastery say rebels have engaged in the practise of summarily killing whole Alawite and Christian families.

According to mother Agn?s-Mariam de la Croix, this has included some events in the city of Homs, which have been yet again presented by rebels as perpetrated by the Assad regime.