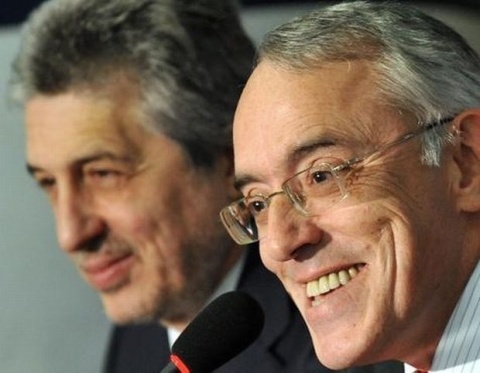 Ognyan Donev (R) and Lyubomir Pavlov (L) were questioned at the National Investigation Services before being charged with tax and document fraud. Photo by sbj-bg.edu

Lyubomir Pavlov and his partner Ognyan Donev, after been summoned by investigators, both appeared for questioning at the National Investigative Office. Donev, who is also owner of Sopharma,  arrived first in the company of two of the most prominent Bulgarian lawyers – Daniela Dokovska and Ina Lulcheva. He spent about 40 minutes inside. Pavlov, also accompanied by a lawyer, arrived at 11 am.

He was the one to comment on the charges after the conclusion of the questioning, calling them a joke, while his defense counsel labeled them absurd. Donev declined comments.

The news about the indictment comes just four days after a scandalous taped recording, implicating publisher of Trud and 24 Hours dailies and chairman of the Union of Publishers in Bulgaria Lyubomir Pavlov, in trading in influence, was published in Presa, a newspaper from the arch enemy group.

In April last year, Bulgaria's competition watchdog gave the green light to the acquisition of WAZ Mediengruppe assets in Bulgaria by Ognyan Donev and Lyubomir Pavlov even though they were accused of an attempted corporate mini-coup.

Grozev and Rutz are giving an emergency press conference in Sofia Tuesday. It will start at 2:3o pm.