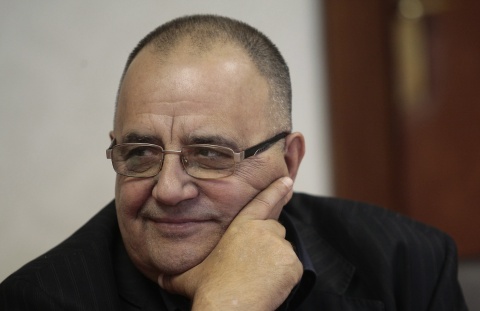 Prof. Bozhidar Dimitrov, head of the Bulgarian History Museum in Sofia, has been joking around with the discovery of what is supposed to be a "vampire skeleton". Photo by BGNES

The medieval vampire skeleton, which was recently discovered in Bulgaria's Black Sea town of Sozopol and was brought to the National History Museum, will not bring trouble to the Bulgarian capital, according to museum head Bozhidar Dimitrov.

"Those who fear that the vampire will bring bad luck to Sofia and its residents should know that it was treated through stabbing with an iron pole as far back as the Middle Ages. In this sense, it is less dangerous than utilized ammunition," Dimitrov told reporters Monday, apparently jokingly referring to last week's explosions at a private-owned ammo depot near Bulgaria's Sliven.

The news about the transfer "has brought much relief to the elderly women of Sozopol," National History Museum head Bozhidar Dimitrov further commented.

Dimitrov has revealed that the skeleton will be examined by anthropology professor Yordan Yordanov before being placed in a special showcase.

The BBC and Russia's RTV have already expressed their interest in filming documentaries on Bulgaria's "vampire" skeletons, according to local media.