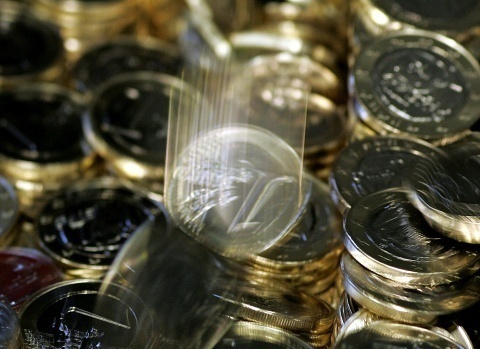 Bulgaria plans to tap international markets to raise funds to repay the first tranche of about EUR 835 M (USD 1.07 B) in 11-year eurobonds maturing on January 15, 2013. Photo by EPA/BGNES

Bulgaria is likely to issue its five-year sovereign eurobond on better terms than the country's foray into international capital markets back in 2002, analysts have said.

The Balkan country expects the interest rate - or yield - that it would have to pay on this new five-year bonds to be 5.5%, 2% lower than the 11-year eurobonds issue maturing on January 15, 2013.

This is the opinion of Georgi Angelov, senior economist with the Open Society Institute Sofia, and leading financier Emil Harsev, who spoke in an interview for bTV channel on Monday.

Angelov noted that several Balkan countries like Serbia, Greece and Macedonia have financial problems, a scenario, which Bulgaria should definitely avoid.

"If negotiators manage to agree on lower interest rates, this will be a sign that Bulgaria is considered to be in a much better shape now," the analyst commented.

The two pointed out that government debt due next January, which the Bulgrian government plans to repay partly by raising fresh money on the international market, dates back to the term of Andrey Lukanov at the beginning of the 90s.

Lukanov, erstwhile communist cabinet minister, prime minister for less than a year (during which his party turned from communist to socialist) and alleged organized crime kingmaker, was shot dead in front of his home in downtown Sofia in 1996.

Bulgaria's parliament ratified last week the contracts with BNP Paribas, HSBC and Raiffeisen as mediators for the eurobond issue that the country plans to float this year.

The motion, tabled by the government, was approved by 101 members of parliament, 34 voted against, while 12 abstained.

Bulgaria plans to tap international markets to raise funds to repay the first tranche of about EUR 835 M (USD 1.07 B) in 11-year eurobonds maturing on January 15, 2013.

The bonds offered on international markets will be worth up to EUR 950 M.

"That's why we decided to start in the spring. The second tranche matures at the beginning of 2015, so the next government will be in the same situation that we are now," he added.

BNP Paribas, HSBC and Raiffeisen will be appointed to advise the Bulgarian state as well as manage the sale of the bond.

The authorities evaluated bids submitted by 17 financial institutions, insiders say. They were ranked according to the price offered, the bank's experience in issuing debt, the amount of the commission fee, as well as their capacity to insure the participation of investors on the domestic market.

According to unconfirmed information Finance Minister Simeon Djankov has decided to go for a five-year maturity partly because of the low indicative prices that the three financial institutions offered - less than a 4% yield - on bonds with that maturity.

The finance minister is also believed to be counting on the banks' assurance that managers will help Bulgaria tap international markets at an affordable cost if the eurobond placement does not draw strong demand.

Bulgaria's Finance Minister Simeon Djankov defended in April the draft law that allows the government to purchase unrated Bulgaria bonds after it came under fire by the European Central Bank (ECB).

In an opinion requested by the Bulgarian government and dated April 13, ECB President Mario Draghi argued that such a law would discriminate against foreign debt securities, which do require a credit rating.

"This leads to unequal treatment of the different investment instruments, which could create competition and market distortions," Draghi wrote.

The Bulgarian government wants to allow its Silver Fund, set up to anchor the public pension system, to also invest in bonds issued by national and local administrations. At the moment, only foreign securities with an adequate credit rating may be purchased.

According to the ECB, the fact that Bulgarian securities would not require a rating could place the Bulgarian government in "a privileged position compared to other issuers."

Such "indirect discrimination" could lead to "unjustified restrictions on the free movement of capital," thus violating European Union rules.

Another concern is that provisions allowing the Silver Fund to channel up to 70 per cent of its portfolio on Bulgarian bonds by 2016 could lead to skewed yields not driven purely by the markets.

Finance Minister Simeon Djankov has responded in a letter by stressing that any Bulgarian bond issues purchased by the fund would have interest rates based on market benchmarks.

Analysts have warned that Bulgaria's government may be forced to struggle with volatile markets if it misses out on the current benign conditions.