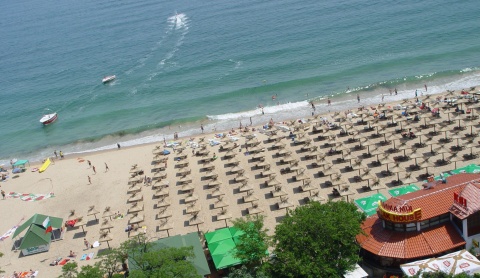 Three out of ninety-three bathing areas along Bulgaria's Black Sea coast do not meet the mandatory values for water cleanliness, while those of excellent quality are down two times over the previous year, a European Commission report shows.

Holidaymakers in Bulgaria should steer clear of the officer's beach in the town of Varna, the Popski beach near Kiten and one of the beaches in the Golden Sands, which is located in proximity to the sewage plant at the resort.

Bulgaria is one of only two EU member states located on the Black Sea, together with Romania. The comparatively new member states started reporting the quality of their bathing waters in 2007.

Europe's beaches are generally clean even though the Netherlands, Bulgaria, Latvia, Luxembourg and Belgium are lagging behind other tourist destinations, according to the report from European Environment Agency (EEA).

"Good news if you're planning a beach holiday in Europe this summer - 92.1% of bathing waters in the European Union now meet the minimum water quality standards set by the Bathing Water Directive," the EEA said in a statement accompanying its annual report.

For Bulgaria however the news is not that good. Bathing spots, which meet the most stringent requirements to reach the "excellent" grade, have shrunk from 76 in 2010 to 42 in 2011. Yet 96.6% of the bathing sites meet mandatory EU standards.

Bulgaria's northern coast is generally cleaner than the beaches in the south, the report found out.

According to it the Netherlands, Bulgaria, Latvia, Luxembourg and Belgium had "relatively low proportions of sites meeting the strict guide values, especially as regards inland waters."

The European Commission report compiled water analyses carried out in 2011 at more than 22,000 bathing sites at beaches, rivers and lakes.

Among the sites meeting the minimum water quality standards were the Serpentine Lake in London, which will host several Olympics events, including the Open Water Marathon Swim and the swimming section of the triathlon.

Spain, Italy and Portugal had more than 80% of sites with excellent water quality, it added.