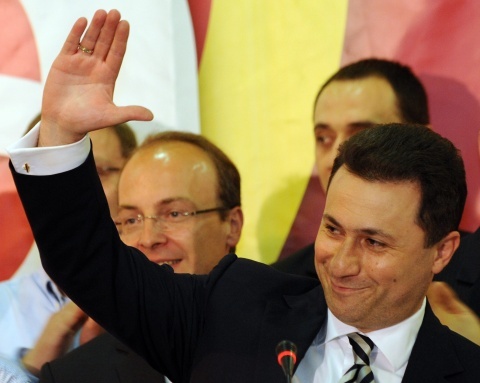 Macedonian Prime Minister Nikola Gruevski greets the supporters of the ruling VMRO DPMNE party during celebration of their victory in parliamentary elections, in Skopje, The Former Yugoslav Republic of Macedonia on 05 June 2011. EPA/BGNES

The outcome of Macedonia's name dispute with Greece will be decided by Macedonian citizens, the country's PM Nikola Gruevski has claimed in a response to a statement made by his Bulgarian counterpart.

Last Friday, Bulgarian Prime Minister Boyko Borisov declared that his country does not agree with Macedonia calling itself "Republic of Northern Macedonia" as a way to resolve the name dispute.

Borisov pointed out that this geographical term would include Bulgarian regions, giving rise to territorial claims. He reiterated his support for Macedonia's European integration bid.

"I welcome Borisov's stance that Macedonia should enter NATO. Secondly, we have dedicated lots of time and effort in resolving the dispute with Greece and we will continue resolving this issue," Gruevski has told Alfa TV.

"We are open to remarks from other countries, but eventually, a decision acceptable for the Macedonian citizens will be made in a referendum," he has stated.