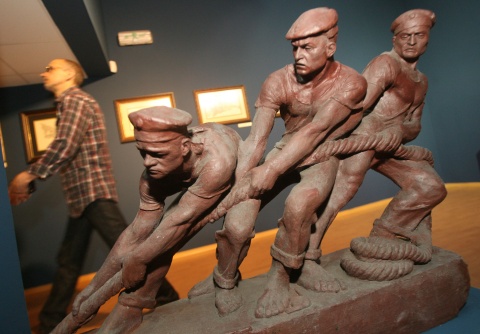 Image from a prior art exhibition at Bulgaria's National Museum of Military History. Photo by BGNES

The Bulgarian National Museum of Military History is staging in Paris an art exhibition entitled "Interpretations of the 1912-1918 Wars" at the Bulgarian Cultural Institute in the French capital.

The exhibit, to be officially opened Monday, features 55 paintings of Bulgarian artists of the period, depicting the efforts and toils of the wars Bulgaria led in the period.

The cultural event is being organized on the occasion of the 100th anniversary of the Balkan Wars, which started 1912 and continued through 1913.

Few of them were mobilized during the Balkan Wars, but many volunteered in the Bulgarian Army.

During World War I, some of those painters received the official status of military painters at the headquarters of the army and various army unit.

As a structure in the then Ministry of War, now Ministry of Defense, Bulgaria's National Museum of Military History has the fortune of possessing many of their fine works relating to the wars they witnessed and participated in.