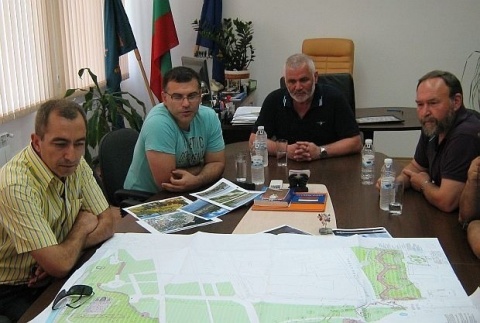 Finance Minister, Simeon Djankov (center-left), and the Mayor of Silistra Dr. Yulian Naydenov, watch the map of the project to restore the First Bulgarian Patriarchate. Photo by BGNES

The news was announced by Djankov during his visit of the Danube city of Silistra, explaining that there will be a ban to use the said additional funding for salary increases or bonuses.

The financial state of all Bulgarian municipalities will be published by the end of June, according to the Minister.

He traveled to Silistra in the company of the Director of the National History Museum, NIM, Bozhidar Dimitrov.

While touring historical sites in the city, the Minister reiterated promises for additional funding for restoration of such sites across the country in order to boost Bulgaria's image as a cultural tourist destination.