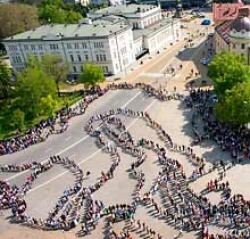 On May 2, 2005 some 13 000 people danced together holding hands in front of the St. Alexander Nevsky Cathedral in the Bulgarian capital in an attempt to break the world record. Photo by Sofia Photo Agency

More than 50 000 Bulgarians, who were expected this weekend to dance together holding hands in an attempt to enter the Guinness World Records, were forced to give up their dream over shortage of funds.

The impressive chain-like horo-dance was to be staged on Sunday in the coastal town of Varna under the sounds of Bulgarian traditional music, but the number of sponsors who pledged financial support was far from enough.

The cancellation comes as a huge disappointment to the initiator of the ambitious project - Elitsa Todorova, best known as a member of a drumming duo together with Stoyan Yankulov. The two made headlines in 2007 after storming the Eurovision final in Helsinki with an impressive performance of their song "Water" and ranked fifth in the final.

"I came up with this idea quite spontaneously. I was provoked by the enormous success I had when singing at the Olympic stadium in Berlin more than 2 000 Bulgarians stood up and started dancing together in one big horo," the ethno singer told 24 Hours daily.

"While I sang and thousands of dancers danced to one and the same rhythm I had the feeling that the stadium would crumble under the cosmic pressure the song "Izlel e delyу hajdutin" has," she recalls.

Affected by the emotional experience, Elitsa Todorova decided to try to inspire and organize a longer chain-like dance than the one in Berlin, featuring more than 50 000 participants.

This was to be the second time that Bulgaria tried to promote its traditional folklore dance make it to the Guinness book. On May 2, 2005, during the Easter holidays, some 13 000 people danced together holding hands in front of the St. Alexander Nevsky Cathedral in the Bulgarian capital in an attempt to break the world record. The number of the participants however was not big enough to enter the Guinness book.

The horo dance is typical for the people on the Balkans. It is mainly played on big holidays or family gatherings - such as weddings for example. The guests take each other's hands forming a chain and start dance in uniform step, which varies according to the type of music played.