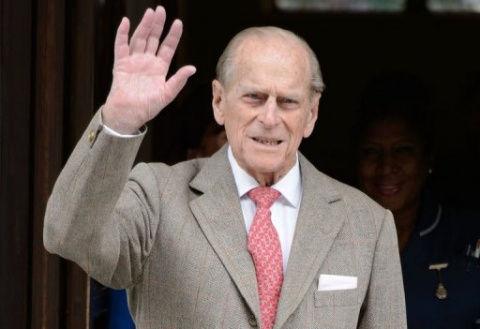 Smiling, Prince Philip waved to well-wishers and shook hands with staff, a day before his 91st birthday on Sunday. Photo by BBC

Smiling, he waved to well-wishers and shook hands with staff, a day before his 91st birthday on Sunday.

He was admitted to London's King Edward VII hospital on Monday, a day after attending the rain-drenched Jubilee river pageant with the Queen.

A spokesman for Buckingham Palace said: "The Duke of Edinburgh continues to make a good recovery."

He added: "He will continue his convalescence at home. He will spend the weekend privately."

On Friday, the duke was visited by the duke of Cambridge and Prince Harry, the latest in a series of visits from his family.

Prince Philip will now celebrate his 91st birthday on Sunday with the Queen at Windsor.

Privately, the couple and their advisers will have to decide what, if any, changes need to be made to the oustanding programme of events which have been planned for the Diamond Jubilee.