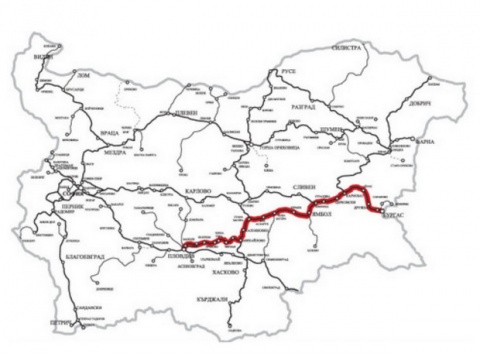 The 292-km Plovdiv-Burgas railway is to be fully rehabilitated by 2015. Map from gradat.bg

Bulgaria has completed the rehabilitation of its key southern railway linking the cities of Plovdiv and Burgas at about 35%, the Transport Ministry announced Friday night.

In May 2011, the Bulgarian government formally started the project for the rehabilitation of the southern rail highway between Plovdiv and Burgas, a major and long-anticipated infrastructure project, whose total length is 292 km.

Thus, trains will be able to reach a speed of 160 km/h in the rehabilitated railway section. The modernization of the entire highway of almost 300 km is supposed to be completed by 2015.

The progress of the project for the Plovdiv-Burgas railway was to presented by the Bulgarian Transport Ministry at a forum in Stara Zagora for projects funded under EU Operational Program Transport, money.bg reported.

The first rehabilitated section of the rail highway is expected to be launched by the end of 2012, starting at the Port of Burgas, and going inland.

During the forum in Stara Zagora, officials from the Bulgarian Transport Ministry explained that Bulgaria's government has already contracted projects under OP Transport (for the 2007-2013 period) worth EUR 1.843 B, which is 92% of the total budget slated for Bulgaria. Of those, EUR 590 M have already been paid to contractors executing the respective projects.

The planned total investment in the Plovdiv-Burgas railway is over BGN 216 M; the rail line will be brought in line with all EU requirements – which few of the Bulgarian railway routes meet as of yet.

The rehabilitation will allow trains to travel at 160 km/h between Plovdiv and Burgas instead of 100 km/h at present, Bulgarian Transport Minister Alexander Tsvetkov explained. This will reduce the travel time by 70 minutes, which is about 4.5 hours at present.