Bulgaria Has Own Stance on Macedonia-Greece Name Dispute - FM 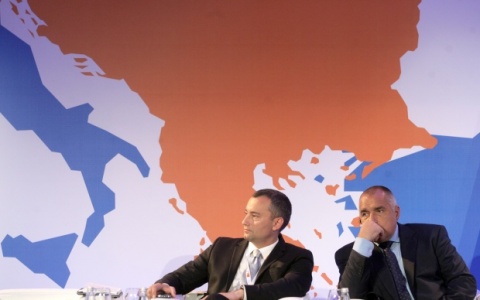 Bulgaria's Foreign Minister Mladenov (left) with Prime Minister Boyko Borisov (right) at the "The Balkans in the Global World" forum in Sofia. Photo by BGNES

Bulgarian Foreign Minister Nikolay Mladenov has reiterated Prime Minister Boyko Borisov's position that Bulgaria does not agree with Macedonia calling itself "Republic of Northern Macedonia" as a way to resolve its name dispute with Greece.

Earlier on Friday, Borisov said the name "Republic of Northern Macedonia" is absolutely unacceptable for Bulgaria, referring to the Greece-Macedonia dispute for the name of the latter, in which Greece is concerned that Macedonia's state name could be used to make claims on Greek districts with the same geographic name.

Bulgaria's Foreign Minister Mladenov spoke at an international conference in Sofia entitled, "The Balkans in the Global World: Encouraging the Region's European Perspective".

He told Macedonian reporters that he does not like the "constant harassment" of Bulgaria on part of Macedonia, apparently referring to the anti-Bulgarian hate language often employed by Macedonian media and even some state officials.

The questions he got asked by the Macedonian reporters were as follows, "Why are you angry at the Macedonian leadership?"; "Why does the policy of disappointment on your part lead to a cold peace between Bulgaria and Macedonia, and there are no contacts between the two nations?"

"Bulgaria isn't intervening in the dialogue between Macedonia and Greece about the name dispute because this is a bilateral thing but when different options are put on the table, we too have our positions on that," Bulgaria's top diplomat explained.

Mladenov underscored his view that all countries in the Balkans must subscribe to the European rules, realizing their EU perspective.

"All of our issues – bilateral, historical, political, commercial, infrastructural, whathaveyou, can only be resolved in this context," he said.

Mladenov also reiterated Bulgarian PM Borisov's words that Bulgaria has always been backing up Macedonia's integration with NATO and the EU.

"Whether and how it will be realized – this is primarily up to Macedonia itself, and the reforms going on there, and, of course, the finding of a compromise solution with Greece on the bilateral dispute," he added.

"We've been living in the Balkans for a long time, we know each other very well, we know our customs, and habits," Mladenov concluded.