Neelie Kroes Stands Up for Media Freedom in Bulgaria 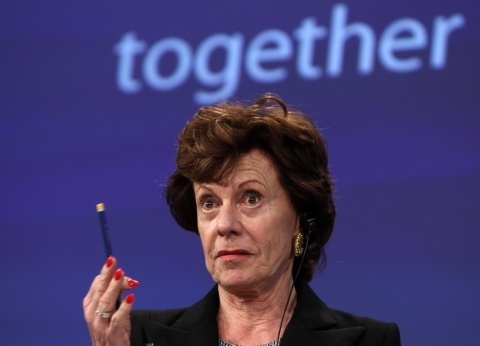 Neelie Kroes, European Commission vice President in charge of the Digital Agenda has voiced concerns as the pressure on Bulgarian media continues, both political and economic, leading to journalism's self-censorship. Photo by EPA/BGNES

She spoke on Wednesday at the open hearing in the European Parliament, organized by the Alliance for Liberal Democrats in Europe (ALDE) in a sign that European Commission and journalists would not give up on media freedom in Bulgaria.

"When we talk about media freedom, it is about protecting key values. Not all EU countries enjoy such freedom and we should fight for it," Commissioner Kroes said, adding she would not hesitate to react if EU values are put at risk.

She cited Reporters without Borders ranking, which placed media freedom in Bulgaria on the abominably low 80th place, saying this is a cause for concern.

Commissioner Kroes recommended that a detailed analysis of the media market in Bulgaria is conducted.

A group of high-ranking officials, headed by former president of Latvia - Vaira Vike-Freiberga, is preparing a report on pluralism and media freedom in the EU and is expected to make recommendations for their protection, the commissioner said.