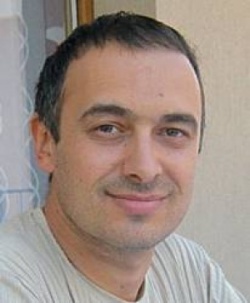 Yordan Dinov, the 39-year-old alleged illegal bookmaker was shot dead in the very downtown of Sofia on April 4, 2012. Photo by Struma

Two men have been arrested in the murder of gambling boss Yordan Dinov, the Bulgarian Interior Ministry reported Thursday.

The police operation was conducted in the Dianabad district of the capital Sofia.

Yordan Dinov, a 39-year-old alleged illegal bookmaker was shot dead in the very downtown of Sofia on April 4, 2012. Police discovered a total of EUR 5 000 and BGN 32 000 in his possession.

He was in Sofia in connection with a legal case against his business, filed by the National Revenue Agency, NRA, and the Gambling Commission.

Dinov was the manager of Sky Sport 365 – Bulgaria, a partner of Austrian sport betting company Planet Win 365. His business was concentrated mainly in his hometown of Blagoevgrad and southwestern Bulgaria.

After the murder, inspectors from the Gambling Commission have executed scores of probes of bookmaking facilities managed by Dinov's company and have issued a large number of citations for violations.

The Director of the Main Directorate for Combatting Organized Crime, GDBOP, Stanimir Florov, said at the time one of the motives was "serious money that was owed to Dinov."

"Taking into account what his business involved, this is very likely," said Florov.

In 2004, the man was investigated for developing an illegal football betting network. The betting network's server is said to have been installed in the Blagoevgrad-based American University in Bulgaria.