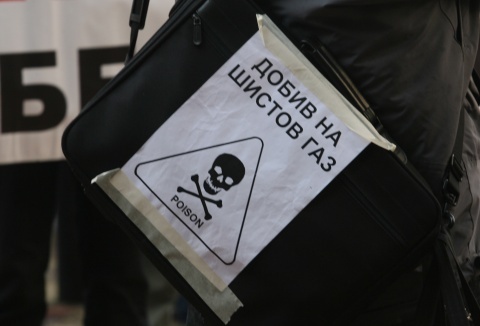 At the beginning of January thousands of young Bulgarians protested against plans to explore the huge shale gas reserves in north-east Bulgaria. Photo by Sofia Photo Agency

Shale gas development in central and eastern Europe, including Bulgaria, is "inevitable" in the next decade even though the country has imposed a moratorium under public pressure, says a KPMG report.

The report pays special attention to Poland, Romania, Ukraine, and to a lesser extent, Lithuania, Hungary and Bulgaria, where it says there are "fantastic opportunities, lying beneath peoples' feet."

"Based on 2010 annual consumption rates, the estimated amount of shale gas in CEE, at 4.13Tcm, has the potential to cover the region's gas demands for decades," the report states.

There is "no doubt" that development of the shale gas industry is "inevitable" in CEE, Steve Butler, Director at KPMG in Hungary's'Energy & Utilities Advisory Practice, and co-author of the report, says in a press release.

"There are proven reserves in several countries, and all, without exception, are desperate to diversify their energy supplies," he adds.

The US Energy Information Administration estimates the joint reserves for shale gas in the Romanian, Bulgarian and Hungarian parts of the Carpathian-Balkan Basin at 538bcm, according to the report.

In January, following a wave of environmental protests, the Bulgarian government revoked a shale gas exploration permit granted to US energy giant Chevron for deposits in northeastern Bulgaria, citing the insufficient proof of the environmental safety of hydraulic fracturing. The decision followed a wave of protests organized by environmentalists and citizens across the country.

On January 18, the Cabinet imposed an indefinite ban on hydraulic fracturing, a method which involves injecting a mix of water, sand and chemicals at very high pressure deep underground to crack rock and release oil and gas.

The protests continued later in the year calling for new legislation to tackle all exploration activities, including a law regulating concessions. According to the protestors the current legislation leaves the door wide open for robbing Bulgaria of its natural resources.