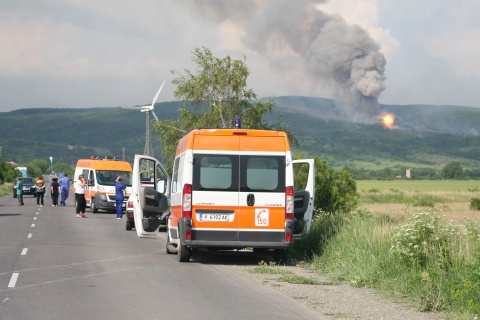 Medical units have been rushed from Sofia to attend to the people in the area of the blast near Sliven. Photo by BGNES

All residents of the Bulgarian village of Gorno Alexandrovo have been urged to leave their homes over the incident in which an ammunition depot exploded near the city of Sliven in Southeastern Bulgaria Tuesday afternoon.

As the explosions at the Bereta Trading depot continued into the evening, the authorities moved to evacuate the 630 residents of Gorno Alexandrovo, while also considering the evacuation of another nearby village, Lozenets.

Sliven Mayor Kolyo Milev, who is a former military officer, has announced that the Sliven Municipality has immediately activated its plan for reaction in disaster situations. He has promised the villagers' homes are already guarded by local police to protect them from looters.

"Danger could grow greater if there are larger-scale secondary explosions but for the time being this is unlikely," the Sliven Mayor said, as cited by Focus.

According to Prof. Nikolay Miloshev, Director of the Geophysics Institute at the Bulgarian Academy of Sciences, the blasts near Sliven caused an earthquake with a magnitude of 1.5 on the Richter Scale.

His statement came early Tuesday night, after earlier the Bulgarian Academy of Sciences announced it had registered no earthquake that might have caused the blasts. Meanwhile, the blasts did cause panic among the local population, with the people mistaking the explosions for an earthquake in the wake of the 5.8-6.0-magnitude earthquake that jolted Sofia and Western Bulgaria on May 22, 2012.