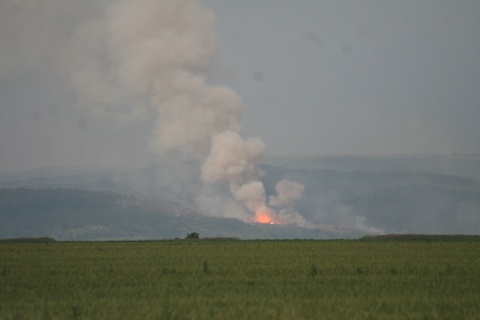 The latest incident in which an ammunition depot exploded near the city of Sliven in Southeastern Bulgaria Tuesday afternoon is the sixth explosion at a munition storage site in Bulgaria since 2000, records shows.

In reverse order, the explosions at Bulgarian munition facilities (owned by either the Defense Ministry, or private firms), are as follows:

Back on November 12, 2011, the northern Bulgarian town of Sevlievo and the villages nearby were woken up by explosions at former military storage facilities near the village of Lovnidol; the 3000 shells contained no chemical or radioactive substances, and nobody got injured.

On August 9, 2008, the grenade storage facility at the Arsenal military plant in Kazanlak, Central Bulgaria, caught fire, leading to explosions; nobody got injured.

On July 3, 2008, in what has been Bulgaria's "most impressive" incident of its kind, the military storage site near the village of Chelopechene right outside of the Bulgarian capital Sofia exploded, with blasts lingering for days. The explosions engulfed explosive processing facilities with 2 500 tonnes of conventional munitions and 20 tonnes of TNT. Nobody got injured but the residents of the villages of Chelopech and Chepintsi, deemed districts of Sofia, were evacuated.

On July 9, 2000, a fire near several villages in the southeastern Haskovo District reached a munition storage depot near the village of Ivanovo, and led to explosions.