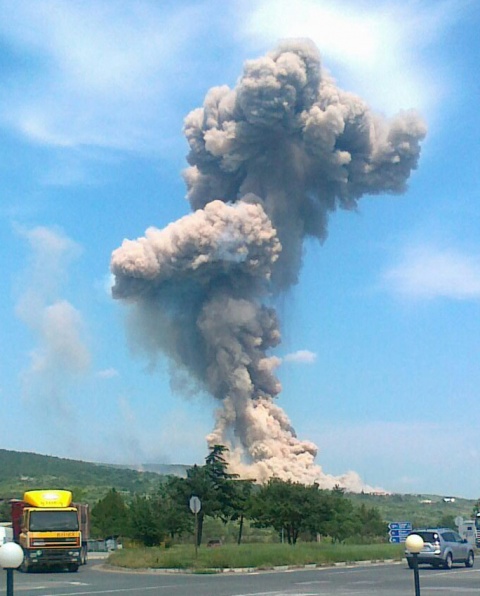 A photo by BNR shows the explosion at a privately-owned ammunition depot near the Petolachkata road junction close to Sliven in Southeastern Bulgaria that occurred Tuesday afternoon.

The ammunition depot that exploded near the city of Sliven in Southeastern Bulgaria Tuesday afternoon is privately owned, the Bulgarian Defense Ministry has announced.

The blasts at the ammo site near the Petolachkata road junction close to Sliven occurred at 2:40 pm on Tuesday, injuring at least 7 people, two of them critically.

Initial reports said the blasts came from a military base near the city of Yambol nearby but the Bulgarian Defense Ministry denied this information.

Thus, the Bulgarian military appears to have nothing to do with the blasted depots, which is said to be owned by a Sofia-based firm, Bereta Trading, which uses it to dismantle munitions – including shells from the Chelopechene military depot near Sofia that exploded in July 2008.

Shortly after the first blasts started, Bulgarian Prime Minister Boyko Borisov rushed Interior Minister Tsvetan Tsvetanov and Defense Minister Anyu Angelov to the site in order to investigate the causes of the explosions.