The Vampire Skeletons of Bulgaria* 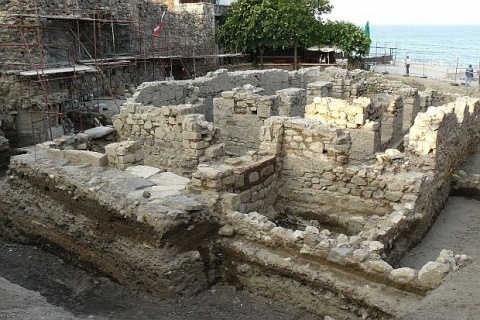 from The Daily Mail

If you thought vampires were simply the stuff of myth and legend - and perhaps the odd teen horror film - think again.

Archaeologists in Bulgaria have unearthed two skeletons from the Middle Ages pierced through the chest with iron rods to keep them from turning into the undead.

They are the latest in a succession of finds across western and central Europe which shed new light on just how seriously people took the threat of vampires and how those beliefs transformed into the modern myth.

The two skeletons, believed to be around 800 years old, were discovered during an archaeological dig near a monastery in the Bulgarian Black Sea town of Sozopol.

Bulgaria's national history museum chief Bozhidar Dimitrov said: 'These two skeletons stabbed with rods illustrate a practice which was common in some Bulgarian villages up until the first decade of the 20th century.'

According to pagan beliefs, people who were considered bad during their lifetimes might turn into vampires after death unless stabbed in the chest with an iron or wooden rod before being buried.

People believed the rod would also pin them down in their graves to prevent them from leaving at midnight and terrorising the living, the historian explained.

According to Mr Dimitrov over 100 buried people whose corpses were stabbed to prevent them from becoming vampires have been discovered across Bulgaria over the years.

He added: 'I do not know why an ordinary discovery like that became so popular. Perhaps because of the mysteriousness of the word "vampire".

'These people were believed to be evil while they were alive, and it was believed that they would become vampires once they are dead, continuing to torment people.'

According to Dimitrov, 'vampires' were often aristocrats and clerics.

He added: 'The curious thing is that there are no women among them. They were not afraid of witches.'

However last month Italian researchers discovered what they believed to be the remains of a female 'vampire' in Venice - buried with a brick jammed between her jaws to prevent her feeding on victims of a plague which swept the city in the 16th century.

Matteo Borrini, an anthropologist from the University of Florence, said the discovery on the small island of Lazzaretto Nuovo in the Venice lagoon supported the medieval belief that vampires were behind the spread of plagues like the Black Death.

The skeleton was unearthed in a mass grave from the Venetian plague of 1576 - in which the artist Titian died - on Lazzaretto Nuovo, which lies around two miles northeast of Venice and was used as a sanitorium for plague sufferers.

Borrini said: 'This is the first time that archaeology has succeeded in reconstructing the ritual of exorcism of a vampire

'This helps ... authenticate how the myth of vampires was born.'

The succession of plagues which ravaged Europe between 1300 and 1700 fostered the belief in vampires, mainly because the decomposition of corpses was not well understood, Borrini said.

Gravediggers reopening mass graves would sometimes come across bodies bloated by gas, with hair still growing, and blood seeping from their mouths and believe them to be still alive.

The shrouds used to cover the faces of the dead were often decayed by bacteria in the mouth, revealing the corpse's teeth, and vampires became known as 'shroud-eaters.'

According to medieval medical and religious texts, the 'undead' were believed to spread pestilence in order to suck the remaining life from corpses until they acquired the strength to return to the streets again.

'To kill the vampire you had to remove the shroud from its mouth, which was its food like the milk of a child, and put something uneatable in there,' said Borrini.

'It's possible that other corpses have been found with bricks in their mouths, but this is the first time the ritual has been recognised.'

While legends about blood-drinking ghouls date back thousands of years, the modern figure of the vampire was encapsulated in the Irish author Bram Stoker's 1897 novel 'Dracula,' based on 18th century eastern European folktales.

*the title has been shortened by Novinite.com (Sofia News Agency)

Views on BG » Be a reporter: Write and send your article
Tags: vampires, Sozopol
Advertisement
Advertisement
Expats.bg All Are Welcome! Join Now!
Related Articles:
More from Views on BG