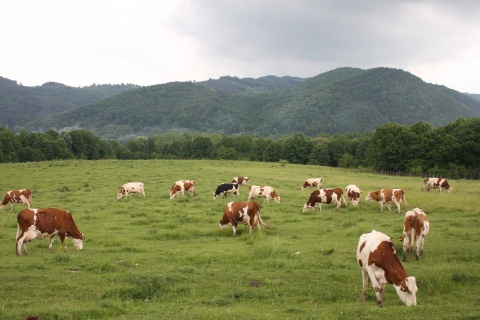 Оrganic livestock breeding registered a substantial increase in 2011, according to Bulgaria's Deputy Minister of Agriculture and Food. Photo by BGNES

The share of organic vs conventional production in Bulgaria registered a 30% annual increase in 2011, according to Tsvetan Dimitrov, Deputy Minister of Agriculture and Food.

Speaking Tuesday at the opening of a seminar on the benefits of organic products, he said that the control system indicated a total area of 26 622 hectares used for organic farming in 2011 due to the increased demand for such products on the European and global markets.

Tuesday's seminar took place within a forum held in Grand Hotel Sofia to present information about the benefits of organic food products and their quality, as well as price trends in the sector.

Bulgaria's Deputy Agriculture Minister explained that cereals were most popular among organic producers, with a 20% annual increase in cereal areas in 2011.

He noted that wheat, corn, barley and rye had occupied the largest organic areas in 2011.

Dimitrov announced that the areas used for growing organic vegetables had increased by 60% to 670 hectares in 2011 from 2010.

He said that the areas used for growing perennial crops like walnuts, hazelnuts, almonds and chestnuts (also very popular among organic farmers), had registered an annual increase of over 60%, followed by plum trees with 40% and apricot and apple trees, according to data from the control system.

He informed that olive trees and other unusual plants for Bulgaria had been introduced in the system for the first time.

Dimitrov drew attention to the fact that organic livestock breeding had also increased significantly in 2011, with a total of 10 000 sheep and goats, 58 000 bee families and the first registered organic bison farm with 200 animals.