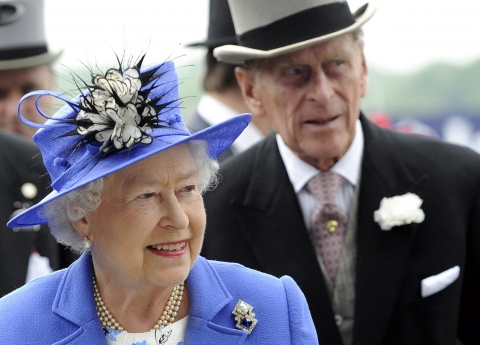 UK's Prince Philip, the Duke of Edinburgh, has been taken to hospital with a bladder infection and will miss the rest of the Diamond Jubilee celebrations.

Buckingham Palace said Prince Philip, 90, had been taken to the King Edward VII Hospital in London from Windsor Castle as a "precautionary measure", the BBC reported.

A spokesman said the Queen would still go to the Jubilee concert at the palace - being attended by 12,000 people. The prince will remain in hospital under observation for a few days.

The prince had appeared to be in good health when he accompanied the Queen on Sunday on the royal barge the Spirit of Chartwell, which formed part of the rain-drenched Jubilee river pageant.

He and the Queen stood for most of the 80-minute journey, as they were accompanied by 1,000 boats travelling seven miles down the river to Tower Bridge.

The prince, who had treatment for a blocked coronary artery in December and turns 91 on Sunday, will miss Monday's concert and the national service of thanksgiving at St Paul's Cathedral on Tuesday.

The Jubilee concert will end with the Queen lighting one of 4,500 beacons across the world marking her 60-year reign.

Beacons in some Commonwealth countries including Tonga and Australia have already been lit.

They are being ignited at 22:00 local time in the Commonwealth and British overseas territories - those in the UK, Channel Islands and Isle of Man will be set alight between 22:00 and 22:30 BST.

Beacons have been placed on the battlements of the Tower of London, and at St James's Palace, Lambeth Palace, Windsor Castle, Sandringham, Balmoral and Holyrood House and on Hadrian's Wall.

And the highest peaks of the UK's four nations - Ben Nevis, Snowdon, Scafell Pike and Slieve Donard - will be lit up by teams from four charities.

The hotel in Kenya where the Queen was told in 1952 of her father George VI's death will also light a beacon.

Ticket-holders for the star-studded Diamond Jubilee concert have been attending the picnic at Buckingham Palace.

They entered the palace gardens - where teams of helpers handed out picnic hampers created by celebrity chef Heston Blumenthal and royal chef Mark Flanagan - to the accompaniment of a steel band.