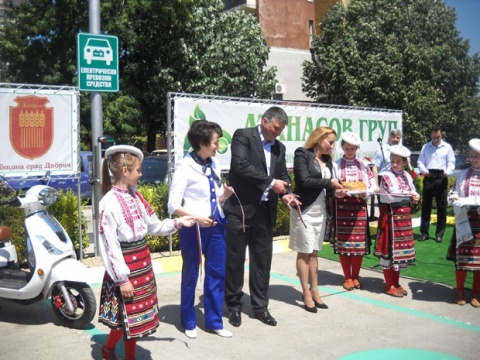 Bulgaria's Dobrich opened the first EV charging station in Bulgaria outside of Sofia on Monday. Photo by Darik Dobrich

The northeastern Bulgarian city of Dobrich has become the second location in Bulgaria to open an electric vehicle charging station outside of the capital Sofia.

Dobrich has thus become the first provincial city in Bulgaria to have a charger for electric vehicles.

The electric vehicle charging station in Dobrich has been built as a private investment of FullCharger Bulgaria in cooperation with Atanasov Group EOOD, a chain of gas stations.

The two companies have decided to put up a total of 20 charging stations for electric vehicles all over Dobrich as well as the coastal Black Sea municipalities in the Dobrich District, Atanasov Group Manager Atanas Atanasov announced, as cited by Darik Radio.

In his words, a charging station for electric cars will most probably be opened in the Black Sea resort town of Balchik by the end of 2012.

"The construction of charging infrastructure is of utmost importance because it will create confidence in the consumers," according to Vessela Sharankova, General Manager of the FullCharger company.

In her words, forecasts indicate that by 2020, about 10% of the cars in Bulgaria will be electric vehicles.

"Dobrich is the only city in Bulgaria outside Sofia that started electric mobility as a new means of transportation," declared in turn Iliya Levkov, chair of the Bulgarian Electric Vehicles Industrial Cluster, a NGO uniting a number of business and scientific actors designed to promote electric vehicles and their development in Bulgaria.

Dobrich Mayor Detelina Nikolova has used the occasion to underscore her city's "leadership role" in the utilization of innovations and technologies. She reaffirmed the Dobrich Municipality's commitment to the development of electric vehicles as a means of transportation.

Earlier, in April, FullCharger Manager Sharankova specified that there were 7 EV charging stations in the country, all of them located in Sofia.

She explained that cities like Plovdiv, Varna, Burgas and Stara Zagora had expressed interest in opening charging points but Dobrich had eventually emerged the winner.

The General Manager of FullCharger said that 5 electric vehicles had already been registered in Sofia, while the number for the whole of the country was about 1100.

She noted that around 1000 of the electric vehicles had been registered in the Burgas region.

Sharankova stressed that the overall number of EVs included cars, bikes, motor bikes, etc., as well as a number of conventional vehicles converted into electric ones.