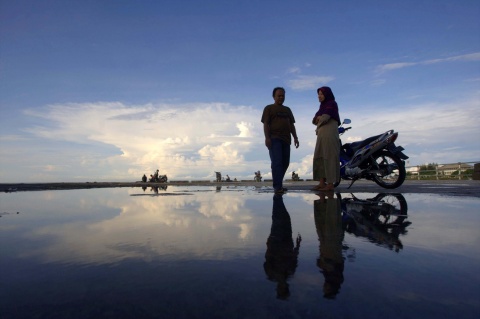 A strong earthquake off Indonesia's coast rattled the capital Jakarta Monday afternoon, but there are no reports of ensuing tsunami.

No damage or casualties were immediately reported. The U.S. Geological Survey said the 5.9-magnitude quake hit 62 milessouthwest of Sukabumi, a town in West Java province, as cited by international media.

It was about 106 miles from Jakarta and 41 miles beneath the floor of the Indian Ocean.

Indonesia's Meteorology and Geophysics Agency had the preliminary magnitude at 6.1. Slight discrepancies are common in the initial measurements.

Indonesia has frequent earthquakes due to its location on the Pacific "Ring of Fire," an arc of volcanos and fault lines encircling the Pacific Basin, but it is uncommon for tremors to be felt in Jakarta.6.1-Magnitude Earthquake Rattles Indonesia