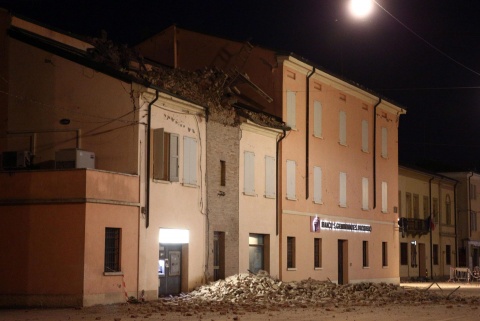 A clock tower in Novi di Modena, that was damaged a few days earlier by an earthquake, collapesed following a new 5.1-magnitude earthquake, in the northern Italy, 04 June 2012. Photo by BGNES

A third strong earthquake measuring 5.1 on the Richter scale jolted northern Italy late on Sunday, according to the Italy's Geophysics Institute.

The region was struck by two deadly quakes in the last two weeks.

The epicenter of the latest quake was the town of Novi di Modena, in Emilia-Romagna, where the two previous jolts killed more than 20 people, forced over 14 000 people to leave their homes and incurred damages worth at least EUR 5 B.

The tremor that struck at around 9.20pm on Sunday was felt as far as Milan, some 200 kilometers to the north.

According to reports of local media, the centuries-old belltower of Novi di Modena was destroyed, while a number of buildings buildings that had been partially damaged by the previous quakes, totally collapsed.

None of the houses that collapsed after the tremor were inhabited.

No victims or injured have been reported so far.