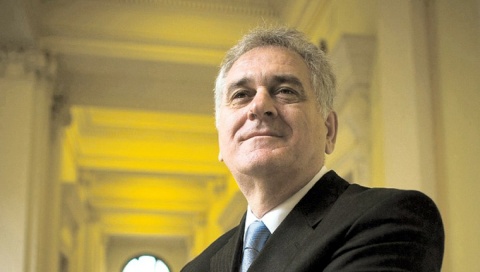 Serbia's new President Nikolic has denied that there was genocide in Srebrenica. File photo

The notorious 1995 massacre of 8 000 Bosnian Muslims in the town of Srebrenica was not genocide but the killings amounted to "grave war crimes," Serbian President Tomislav Nikolic declared on Friday.

"There was no genocide in Srebrenica," Nikolic said in an interview with Montenegrin state television published on its website Friday.

"In Srebrenica, grave war crimes were committed by some Serbs, who should be found, prosecuted and punished," said Nikolic, as cited by BGNES, just days after he was sworn into office after defeating Serbia's ex pro-EU President Boris Tadic.

About 8 000 Muslim men and boys were slaughtered in a matter of days after Bosnian Serb troops overran the UN-protected enclave of Srebrenica in Bosnia in July 1995 in what was the gravest atrocity in Europe since World War II.

The UN Criminal Tribunal for the former Yugoslavia (ICTY) and the UN's highest court, the International Court of Justice, have both ruled that the Srebrenica massacre constitutes genocide.

"It is very difficult to indict someone and to prove before a court that an event qualifies as a genocide", the new Serbian President declared without commenting on the rulings of the ICTY and the ICJ.

Former Bosnian Serb political and military leaders Radovan Karadzic and Ratko Mladic are currently on trial before the ICTY on genocide charges notably for their role in the massacre.

Nikolic also made it clear that he does not intend to go to Srebrenica, which has a yearly commemoration on July 11.

"Do not ask all the time of the Serbian president when he is going to Srebrenica. My predecessor was there and paid tribute... why should every president do the same?" he said, lashing out at the interviewer.

Former president Boris Tadic apologized to Srebrenica victims when he attended the 2005 commemoration of the massacre. He was also present at the ceremony in 2010.