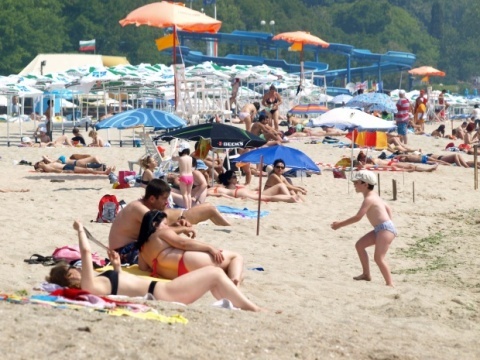 Russian tourists are flocking to Bulgaria in greater numbers for summer vacations. Photo by BGNES

The Bulgarian consular office in Moscow has issued 6211 visas in a single day, a record for the number of visas issued since the introduction of the visa system between Bulgaria and Russia, the Bulgarian Foreign Ministry said.

The Foreign Ministry in Sofia also notes that the association of tour operators in Russia has expressed thanks for the excellent organization at the Bulgarian Embassy for timely issuance of visas to Russian tourists, and adds that there have been no complaints from accredited tour operators, community or state organizations or from individuals about passports being delayed or not received on time.

Bulgaria remains one of the top holiday destinations for Russians, and expects a 30% y/y growth in the number of Russian visitors, according to the Bulgarian Consulate in Moscow.

The number of Russians traveling to Bulgaria for the purpose of purchasing real estate properties or spending time in vacation homes that they have already purchased; organized children's tourism is also on the rise.

The Bulgarian consulate in Moscow recently made clear its expectations to be issuing about 4 500 visas to Russian visitors daily during the busiest summer periods. In order to meet this demand, it has boosted its staff, adding 8 new members.

According to Bulgarian government data, Bulgaria was visited by 6.4 million foreign tourists in 2011, an overall increase of 4.6% compared with 2010. At the same time, Bulgaria's revenues from foreign tourists' visits grew by 3.8 y/y, reaching EUR 2.8 B.