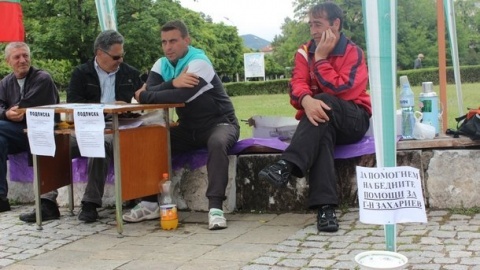 Workers of the Lead and Zinc Complex in Kardzhali are seen collecting signatures for a petition in their support. Photo by BNR

The Polish consortium Silesia and the majority owner of the troubled Lead and Zinc Complex (LZC; OTZK) in Bulgaria's Kardzhali will sign a 3-year management contract.

The news emerged after a meeting of the Control Board of the Complex and the Board of Directors of Intertrust Holding, which is the majority owner.

In a statement to the Bulgarian Stock Exchange, the Holding grounds the decision to finalize negotiations with Silesia on the lack of real investor's interest, social and public tensions, and the opinion of bank lenders.

The largest Bulgarian producer of non-ferrous metals, the Lead and Zinc Complex (LZC; OTZK) in the southern city of Kardzhali has been in trouble for at least several months now, with many fearing that the heavily indebted LZC, which has been out of operation in the past four months, will have the fate of Kremikovtzi, the behemoth steel mill near Sofia, which no longer operates as a result of years of mismanagement.

The creditors and trade unions have agreed to seek a way to fuel the Lead and Zinc Complex in Kardzhali again.

On April 12, after 40-day protests over delayed salaries, the workers at the Lead and Zinc Complex received some of their money, totaling BGN 500 000, which were distributed on as a result of the sale of another troubled company, the Gorubso-Madan mining firm.

Both the LZC and Gorubso-Madan were part of Intertrust Holding owned by Bulgarian tycoon Valentin Zahariev. However, both have descended into debt, leading to workers' protests, and an intervention by the state arranging the sale of both companies by Intertrust Holding.

Zahariev owes a total of BGN 1.4 M in unpaid salaries to the Lead and Zinc Complex workers, and the payment of the January salaries came after 42-day protests by the plant workers which started in Southern Bulgaria and reach the capital Sofia. Zahariev has raised the needed cash through the sale of the Gorubso mines in the southern town of Madan.

Bulgaria's government has indicated that the LZC in Kardzhali is also for sale, and that there are three bidders – one Bulgarian and two foreign – vying for it. However, Bulgaria's Finance Minister and Deputy PM in charge of the economy Simeon Djankov never specified which the bidders were, with the news about the interest expressed by the Polish consortium first emerging on April 20.

A total of 519 employees of the Lead and Zinc Complex in Kardzhali, the leading Bulgarian non-ferrous metals producer, had not received salaries for half a year.

In early April, the workers filed personal claims in Court against the owner of the plant, Bulgarian oligarch Valentin Zahariev, who is also known for mismanagement of what used to be the largest steel-maker in Bulgaria, the now bankrupt Kremikovtzi plant near Sofia. They demand the replacement of the entire management, starting with him.

It was reported on May 20th that Valkanov has created jobs for 60 workers from the OTZK.