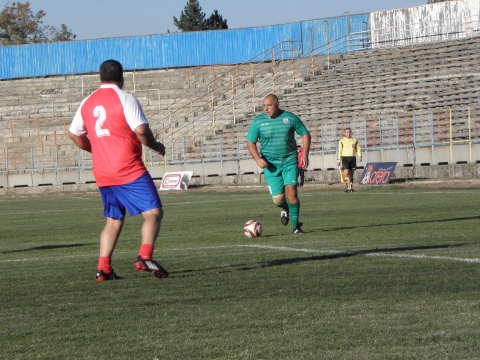 Borisov assisted for his team's winning goal in the 67th minute as Vitosha defeated Dve Mogili 2:1. The game was played at Bulgaria's national stadium Vasil Levski in Sofia.

"The tigers of Bistritsa", as Bulgaria's PM affectionately calls his amateur side, enjoyed the support of several cabinet members, most notably Finance Minister and Deputy PM Simeon Djankov, who showed up at the game with a special poster.

"The Tigers – no deficit," the poster said.

"I couldn't believe my eyes. I saw a poster, I read it, it seemed quite finance-like. Then I saw Djankov and it all became clear," Borisov told reporters.

"If you had arrived by train (at the game), they wouldn't be striking in front of the Ministry today," he told him, referring to Bulgarian State Railways employees protesting against planned layoffs.