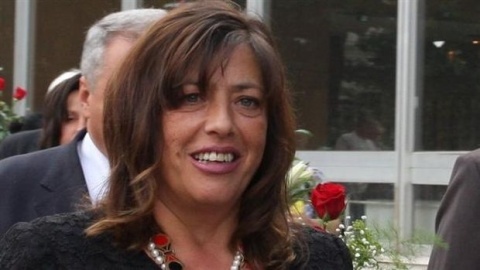 The Mayor of Pernik, Rositsa Yanakieva, appeals to other cities to send experts and engineers to assess the damage after the strong May 22 earthquake and lasting aftershocks. Photo by blagoevgrad.eu

Residents of Bulgaria's western city of Pernik spent again the night in their cars in the aftermath of the 3.8 magnitude aftershock that rattled the region Tuesday, one week after the 5.9 quake.

Speaking in an interview for the private TV channel bTV Wednesday morning, the Mayor of Pernik, Rositsa Yanakieva, informed about wide-spread panic in the city, accentuated by the new plan of the Interior Ministry to inform the population by the use of loudspeakers. She said that the Civil Defense sirens had not been activated under her decision precisely because the loudspeakers stirred additional panic.

"People got even more scared because they could not understand what they were told through these loudspeakers and I must admit I, myself, have never been able to hear words coming from such devices," said she.

Yanakieva appealed to her colleagues from other cities to send engineers and construction workers to assist Pernik teams in repairs and rebuilding. She informed that there is a shortage of experts to look at and appraise all damage.

The Mayor pointed out that the City Hall had not refused assistance to anyone who asked for it, but explained that people must seek help, not wait for municipal employees to go around and find out what everyone needs.

On the backdrop of fears in Pernik, scientists advise locals to become used to aftershocks, which can last for months.

Meanwhile, a new tremor was registered at 8:36 am with the same epicenter as on May 22. It was listed at 3.2 points magnitude on the Richter scale and was felt in Pernik and the capital Sofia.