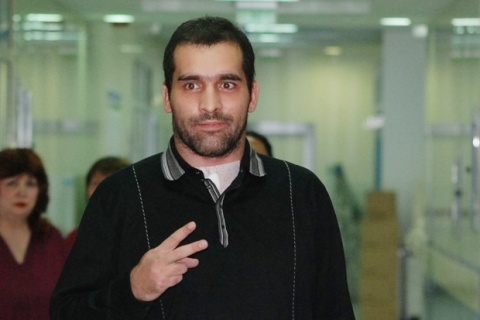 Ivanov gave a brief conference at Sofia's Pirogov hospital on May 19, his first media appearance since he was stabbed. Photo by dariknews.bg

Blagoi Ivanov, the Bulgarian MMA fighter who was stabbed almost fatally in February, has been released from hospital after hanging between life and death for three months and three days.

Ivanov was treated at Sofia's emergency hospital Pirogov, where he relapsed into coma a few times and put the skills of a great team of doctors to the test.

On February 26, Ivanov and two of his friends had just occupied their places in a bar on Graf Ignatiev Str., in downtown Sofia, when a group of 8 persons armed with bats and knives allegedly came in and attacked them.

The MMA fighter suffered a deep stab wound in the chest that affected one of his lungs and his heart. His condition remained critical for several weeks.

Blagoi Ivanov recently gave his first press conference after the attack, declaring that he is determined to return to the fighting ring. Blagoi Ivanov aka Bagata won the gold medal in the 2008 World Sambo Championships and the bronze in the 2006 world contest. In Bellator MMA fights, he has never lost a match, having won 6 of his 7 games this far, and tied one.

A 23-year-old suspect for the assault remains in custody.