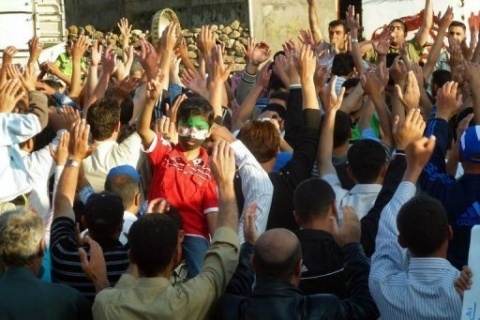 A handout image released by the Syrian opposition's Shaam News Network shows anti-regime demonstrators in Houla in the region of central Homs province. Photo by EPA/BGNES

Close to a dozen countries, including the United States, Great Britain and Bulgaria, have announced they were expelling Syrian diplomats in a coordinated move reflecting the international outrage about a massacre in the town of Houla.

The Netherlands, the United States, Australia, Great Britain, France, Germany, Italy, Spain, Bulgaria and Canada all announced Tuesday that they were expelling some Syrian diplomats.

A UN official has said it's "clear" that Syrian government forces were involved in the massacre, which left more than 100 people dead, nearly half of them children.

A "fairly small number appear to have been killed by shelling, artillery and tank fire which took place over a period of more than 12 hours," said Rupert Colville, a spokesman for the UN human rights office, as cited by CNN.

The majority appear to have died as a result of "summary executions" by "armed men going into houses and killing men, women and children inside," he said.

"What is clear is government forces were involved. They were shelling, using tanks and artillery. And it appears to be Shabiha militia (a government militia group), entering houses and slaughtering people in what is really an abominable crime that took place throughout the day on Friday."

Syria has denied being behind the killings, insisting that "terrorists" carried them out. Syrian officials said the government would investigate.

On Tuesday, Bulgaria's Foreign Ministry formally asked Salah Sukkar, Charge d'Affaires of the Embassy of Syria, to leave in the wake of the recent massacre of civilians in the Syrian town of Houla.

Following Bulgairan Foreign Minister Nikolay Mladenov's instructions, Deputy Foreign Minister Ivan Naydenov met Monday with Salah Sukkar to discuss the killings of more than 100 Syrian civilians, including 30 children, in the town of Hula and the escalation of violence over the last few days.

Salah Sukkar, Charge d'Affaires of the Embassy of Syria, has been notified that he must leave Bulgaria within 72 hours.

"This measure is in response to the monstrous massacre of more than 100 people in the town of Houle by the regime in Damascus and the continuing violence against civilians in the Arab country," the Bulgarian Foreign Ministry stated.

In addition to Sukkar, two other Syrian diplomats are also supposed to leave Bulgaria, it said.