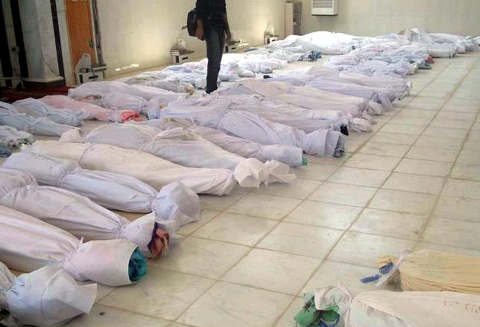 An image that was published by Syrian citizen platform Houla Media Center on 26 May 2012 shows bodies covered in white shrouds, allegedly killed in the massacre in Houla, Homs province, Syria, 25 May 2012. EPA/BGNES

Bulgaria's Foreign Ministry has formally asked Salah Sukkar, Charge d'Affaires of the Embassy of Syria, to leave in the wake of the recent massacre of civilians in the Syrian town of Houla.

So far, the USA, France, Germany, the UK, Spain, Italy, Canada and Australia have taken steps to expel the Syrian diplomats in a bid to step up pressure on the regime of Syrian President Bashar al-Assad in Damascus amid continuing violence by government forces against civilians and opposition members.

Following Bulgairan Foreign Minister Nikolay Mladenov's instructions, Deputy Foreign Minister Ivan Naydenov met Monday with Salah Sukkar to discuss the killings of more than 100 Syrian civilians, including 30 children, in the town of Hula and the escalation of violence over the last few days.

Salah Sukkar, Charge d'Affaires of the Embassy of Syria, has been notified that he must leave Bulgaria within 72 hours.

"This measure is in response to the monstrous massacre of more than 100 people in the town of Houle by the regime in Damascus and the continuing violence against civilians in the Arab country," the Bulgarian Foreign Ministry stated.

In addition to Sukkar, two other Syrian diplomats are also supposed to leave Bulgaria, it said.

For more than a year, Assad's regime in Syria has been faced with civil unrest as part of the so called Arab Spring revolutions.