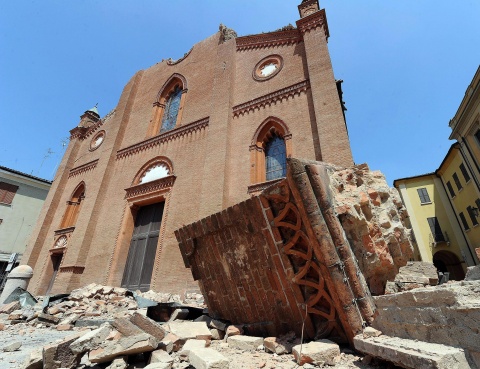 The cathedral Mirandola is severely damaged after an earthquake in Mirandola, Itay 29 May 2012. EPA/BGNES

A second, 5.6 degree tremor has shaken the north of Italy Tuesday, after a 5.8 degree quake claimed the lives of at least 10.

According to the US Geology Survey, the epicenter of the earthquake was some 49 km northwest of Bologna.

The epicenter of the first Tuesday quake is estimated to be the in the commune of Mirandola in the region of Modena, 40 km north of Bologna and 60 km east of Parma.

No reports of destruction and casualties are available regarding the second tremor, but the first was vastly destructive, demolishing buildings that had suffered the 6.1 degree quake May 20.

11 aftershocks have been felt until 3 pm local time, ranging from 4 to 2.6 degrees on the Richter scale.