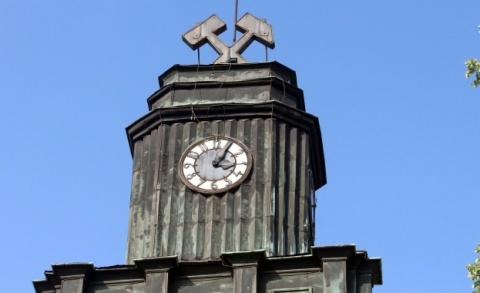 The handles of the city clock in Bulgaria's Pernik are frozen at the time when the first and strongest quake shook the city one week ago. Photo by BGNES

The high school matriculation exam in Bulgaria's western city of Pernik has been terminated Tuesday after the latest earthquake aftershock hit the region.

The shock was registered at 10:23 am with a magnitude of 3.8 points on the Richter scale.

High school seniors in the region were taking their second matriculation exam after the initial postponement from May 22, when the first quake with a 5.9 magnitude rattled the area.

The exam questions were drawn at 7 am, but students were taken outside the classrooms immediately after the shock was felt. May residents of the city of Pernik have, reportedly, left their homes and offices in panic.

Children have been evacuated from day care centers as well.

Education Minister, Sergey Ignatov, informed that he will make a decision ASAP about the new date of the exam.

According to the European Seismology Center, the Tuesday quake had a 3.7 magnitude while National Institute in Geophysics, Geodesy and Geography, at the Bulgarian Academy of Sciences, BAS, listed it at 3.8. The epicenter of the tremor was some 20 km south-west of the capital Sofia, and just on the outskirts of Pernik.

The shock has been felt in Sofia. There are no reports of injuries, casualties or material damage.