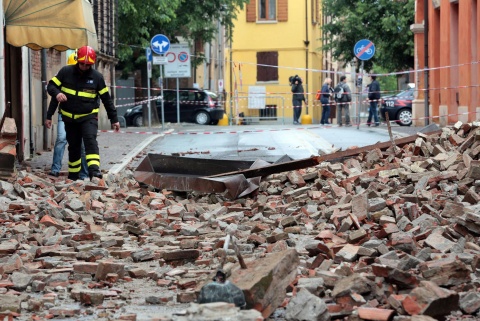 Partial view of the ruins of the cathedral in the 'red area' of Finale Emilia, Emilia Romagna, Italy, 21 may 2012. Photo by EPA/BGNES

Many people are feared to have been trapped beneath the rubble of newly collapsed buildings.

The new tremor, reported to be of 5.8 maginitude on the Richter scale, was felt throughout nothern and central Italy.

According to inital reports, the epicenter was in the commune of Mirandola in the region of Modena, 40 km north of Bologna and 60 km east of Parma.

Buildings that suffered damage during the initial 6.1-degree earthquake May 20 have collapsed.

People are reported fleeing stores and offices in Milano, Bologna and the Aosta Valley near the border with France.

The initial earthquake hit the Italian province of Emilia Romana around 4 am Sunday, May 20.

It destroyed many buildings of historical significance, but also new ones, causing the deaths of seven persons.

Some 7,000 persons are still living in temporary housing, after their homes were destroyed or damaged.