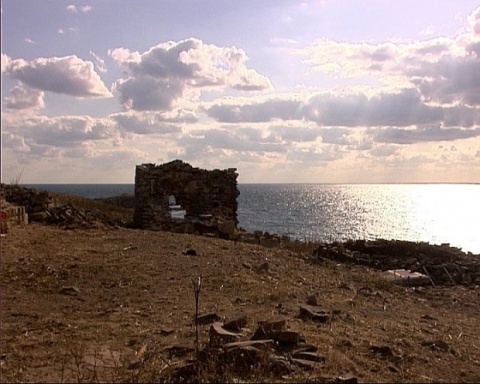 Part of the remains of the fotress wall in Bulgaria's Sozopol on the Black Sea. Photo by Novinar

Bulgarian archaeologists have discovered an ornamented dagger belonging to a Western European knight during excavations of the fortress wall at the entrance of the Black Sea town of Sozopol.

"The archaeologists, who have been excavating the area before the fortress wall entrance of Sozopol for more than a year now, have come across a beautiful knight's dagger," announced Prof. Bozhidar Dimitrov, director of the Bulgarian National History Museum, as cited by Focus.

In his words, the dagger has a 20-cm blade and a richly decorated handle; it must have been dropped by a warrior, most certainly a Western European knight, during an attack on the Black Sea fortress of Sozopol back in the 14th century.

"Daggers are not a weapon that was used by the armies of the Bulgarian or Byzantine Empires in the Middle Ages, which wages wars in this region all the time; daggers were used by Western European knights who employed them for close combat whenever they could not brandish around their enormous swords. The Bulgarians used primarily sabers, while the Byzantines used shorter, 70-cm swords that were equally good in an open field and in close combat," Dimitrov explained.

The head of the Bulgarian National History Museum believes the knight's dagger ended up near Sozopol's fortress wall back in 1366 AD when the troops of Amadeus IV (1334-1383 AD), Count of Savoy.

"In 1366 AD, the Balkans saw dramatic events. The Bulgarian Tsar Ivan Alexander (r. 1331-1371 AD) took captive in Vidin Byzantine Emperor John V Palaiologos (1332-1391, r. 1341-1391 AD), who was coming back by ship down Danube from Hungary where he unsuccessfully begged for Western help against the advancing Ottoman Turks. In order to free her son, John V Palaiologos's mother paid to direct the crusade of Italian Count of Savoy Amadeus IV against the Bulgarian Black Sea coast. Amadeus's navy arrived at Sozopol, and laid a siege to the Black Sea fortress. Two weeks later, after fierce fighting, the town was conquered by Amadeus, the Count of Savoy. Amadeus's small army had Italian, French, and German knights," Dimitrov narrated.

He believes that the dagger now discovered by the Bulgarian archaeologists must have been dropped in the moat around the fortress of Sozopol during the siege fighting since it would have otherwise been seized as a trophy.