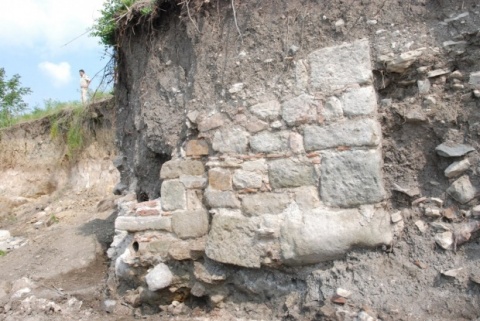 The latest excavations in Sarafovo started when the Black Sea waves uncovered the walls of Roman-era structures. Photo by Darik Radio

Bulgarian archaeologists have found a church dating back to the late Antiquity period, which is located near the village of Sarafovo, on the Black Sea coast.

The site, which is close to the Bulgarian Black Sea city of Burgas, has been excavated by the team of Prof. Dr. Lyudmil Vagalinski, who is the Director of the National Archaeology Institute and Museum at the Bulgarian Academy of Sciences, since the start of May 2012.

"We can safely say that we have found a small church. Initial evidence allows us to date it back to the 4th-6th century AD," Prof. Vagalinski explained as cited by Darik Radio.

The excavations at Sarafovo (a village also known for hosting a military airfield) began after over the winter the sea waves uncovered parts of a Roman structures – a residential building with a sewage system, whose existence has been suspected by Bulgarian archaeologists since the 1970s.

At the end of February 2012, the Bulgarian government allocated BGN 120 000 for the excavations near Sarafovo.

Initially, the Bulgarian archaeologists supposed they might uncover a Roman town on the coast of the Black Sea, with a port at the entrance of local mineral baths – located at a town known as Aquae Calidae (located on the territory of two quarters in today's city of Burgas).

The latest excavations, however, have rejected the hypothesis of the archaeologists of the existence of a new Roman-era port town near Aquae Calidae, and have only confirmed the existence on the spot of a small ancient church instead.

The excavations in Sarafovo will continue by mid-June; the archaeologists believe that saintly relics might have been built inside the foundations of the church they found; back in 2012, another Bulgarian archaeologist, Prof. Kazimir Popkonstantinov, found relics of St. John the Baptist in an ancient church on the St. Ivan Island near Sozopol.

The archaeologists and the Burgas Municipality plan to construct a facility protecting the ancient site in Sarafovo from the corrosive influence of the waves and wind, especially strong during the winter.