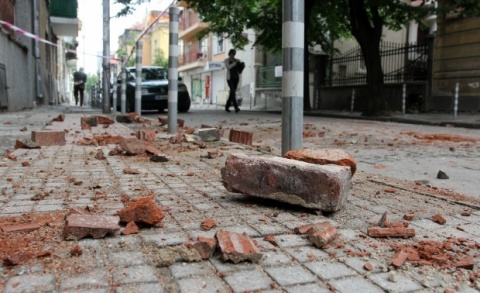 Bulgaria's Sofia has suffered BGN 1.3 M worth of damages in the May 22 earthquake. Photo by BGNES

The damages caused by the 5.8-6.0-magnitude earthquake in the Bulgarian capital Sofia are estimated at BGN 1,3 M, announced Sofia Mayor Yordanka Fandakova.

Almost a week after the earthquake that jolted Western Bulgaria on May 22, 2012, Fandakova said the Sofia Municipality has completed its report on the damages on its territory.

Thus, the municipality will ask the ad hoc inter-departmental commission formed by the Cabinet for BGN 1.3 M (over EUR 600 000).

"We enjoy great cooperation with our colleagues from the Interior Ministry. We are continuing to analyze the damages in detail. The commission will be allocating money for damages to any buildings that have all the necessary legal papers," Fandakova explained.

The western Bulgarian city of Pernik located some 20 km southwest of Sofia, which was closer to the earthquake epicenter than the capital, has suffered damages worth at least BGN 20 M, its mayor announced over the weekend.