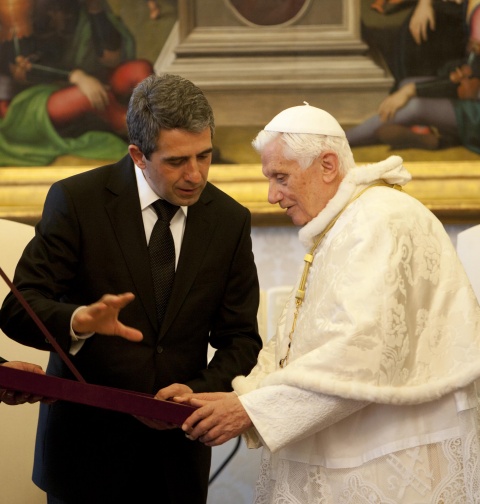 Photo by the Office of the President of the Republic of Bulgaria. President.bg

An official Bulgarian delegation headed by President Rosen Plevneliev visited Thursday, May 24, Pope Benedict XVI on occasion of the day of the Cyrillic alphabet.

May 24 Bulgaria celebrates the deeds and legacy of Sts Cyril and Methodious - two Byzantine scholar brothers who developed the first script for the Slavic languages.

On this day a Bulgarian official delegation is officially sent to the Vatican, after Pope John Paul II proclaimed Sts Cyril and Methodius co-patrons of Europe together with St Benedict of Norcia in 1980.

"Our invitation is open, as is our country. Bulgarians have their hearts open for the Pope," said the President.

He added that Bulgaria is not only a haven of stability, but also could send a powerful message to the rest of the world.

Pope Benedict XVI thanked for the invitation and promised to consider it seriously.