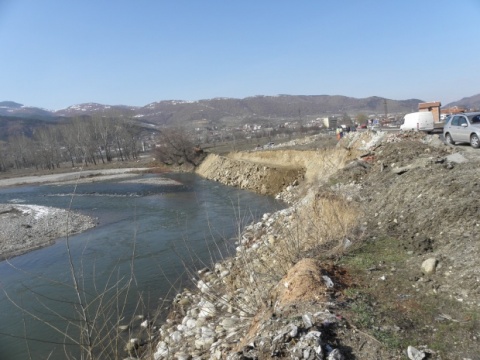 Traffic between the towns of Petrich and Sandanski in southwestern Bulgaria is being detoured Wednesday morning over a bridge collapse. Photo by BGNES

A bridge over the Struma River in southwestern Bulgaria between the towns of Sandanski and Petrich, near the village of Ribnik, collapsed Wednesday morning.

The news was reported by the Bulgarian National Radio, BNR, citing radio Blagoevgrad, and has been confirmed by the Interior Ministry.

The reason for the collapse is not attributed to the strong earthquake that hit western Bulgaria Tuesday morning nor to the aftershocks, but to torrential rains in the area and the overflowing river.

There was a car on the bridge at the time of the collapse and it fell into the waters. The driver, who has been the only person inside, has been rescued and is receiving psychological help.

The collapsed section is about 50 km long. Traffic is being detoured through Kulata-Marikostinovo and through "Mamin Kolio."