Bulgaria-German Pop Star to Tie the Knot in Lesbian Marriage 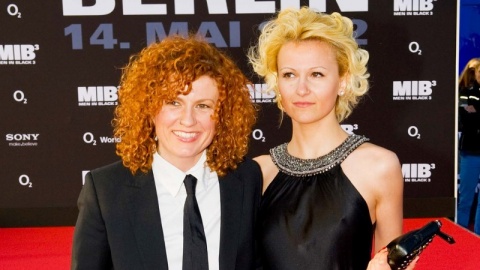 Bulgarian Lucy Diakovska and Kamelia are pictured here at the German premiere of Men in Black 3 ON May 14 at O2 World in Berlin.

Openly lesbian Bulgarian pop singer Lucy Diakovska, a star from German girl band No Angels, has revealed she and her girlfriend are soon to hear wedding bells.

"I am here with my girlfriend Kameliya. We have been together for quite a long time and I am very happy. We are getting married soon, but I won't tell you the exact date," Diakovska told German magazine Bunte.

Lucy Diakovska and Kamelia attended as a couple the German premiere of Men in Black 3 on May 14 at O2 World in Berlin.

In the summer, Lucy signed a contract to join the jury of the tenth season of the German show "Popstars", which will be aired by ProSieben TV channel. Diakovska was cast in the same role in the Bulgarian edition of Music idol 2.