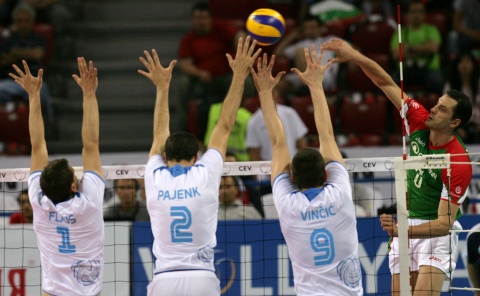 Renown Bulgarian volleyball player Matey Kaziyski has hinted he may boycott the upcoming Olympic Games in London due to the scandal that erupted between Bulgaria's volleyball federation and the country's national team coach.

Coach Radostin Stoychev was dismissed by the federation on Sunday, a day after his team was defeated by Germany in the second semifinal of the 2012 Olympic Games-European Qualification Tournament in Sofia.

The dismissal triggered an outrage among Bulgarian volleyball fans who stated that Stoychev's dismissal was humiliating and that the move would deal a serious blow to the team's efforts to qualify for the Olympic Games.

Stoychev, who learned about his own dismissal from the media, as well as several key players, including Kaziyski and setter Andrey Zhekov, voiced their strong criticism of the way the volleyball federation has been managed.

On Wednesday, the federation reinstated Stoychev as national team coach, a move believed to be inspired by Bulgarian Prime Minister Boyko Borisov. Borisov demanded that Stoychev be reinstated earlier the same day.

Stoychev declared that he will not lead the team at the Olympic Games if the federation's president, Dancho Lazarov, does not resign.

On Friday, Kaziyski said the team is now focused on qualifying for the Olympic Games.

"I am staying in the team for the qualifying campaign," he told Nova TV, prompting local media to suggest that he would boycott the Olympic tournament if the team qualifies.

Kaziyski once again criticized the federation, stating it has prioritized personal interests over volleyball.